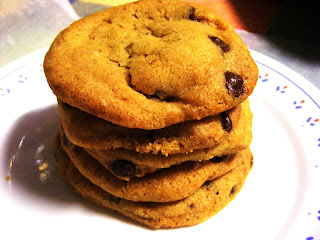 Everyone has a good choc chip cookie recipe and this one is taken from the Australian Womans Weekly Magazine. I have done this many times over and it always turns out great!
Ingredients:

Posted by Norzaini at 7:04 PM No comments: 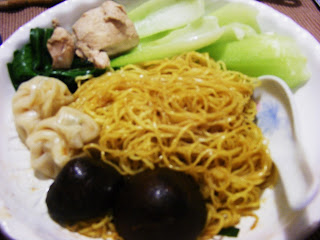 This yummy noodle is generally found in most of the Chinese stalls in Kuala Lumpur. However I am presenting you this halal version which uses chicken in the won ton filling.
You can vary the accompaniments, the veggies can be bak choy, kai lan or Chinese Mustard Greens (sawi). or you can add some shitake mushrooms.
The basis of this dish is the won ton soup which gives it the flavour. So if you nailed the soup....you are halfway there!
You will need:
1 packet of won ton skins
250gms minced chicken
1 tsp minced garlic paste
1 tsp minced ginger paste
2-3 drops of sesame oil
2 tbsp thinly sliced spring onions
2 tsp light soy sauce
2 cups of chicken stock or
2 cups of water
Mix all ingredients except the won ton skins. Place 1 tsp of mixture onto the skin and seal with water and pinch to close. Repeat until all mixture has been used up.
Add filled won tons into a pot of boiling chicken stock/water. Won tons will float up to the surface when cooked. Add salt and pepper to taste & chopped spring onions. Remove from heat.
Prepare a pot of salted boiling water (to blanch the noodle and the vegetables) and a separate pot of cold water to cool off the noodles.
1 packet of egg noodles (there are normally 4 rolls in a packet)
blanch each loosened roll in boiling water for 2 minutes or until al-dente and immediately immerse in cold water to firm the noodles. Strain and set aside into a bowl.
Sauce for tossing (enough for 2 rolls of egg noodles):
2 teaspoon of sesame oil
2 teaspoon of light soy sauce
2 teaspoon of oyster sauce
1 teaspoon of dark soy sauce
1 teaspoon of sambal chili paste (optional)
Mix all the above and toss the cooked noodles until they are all coated well, you can add 2 tbsp of soup if noodles are too dry.
Serve with blanched vegetable, won tons or shitake mushrooms (also blanched in salt water) and a side of the soup.
Posted by Norzaini at 10:27 PM No comments:

Posted by Norzaini at 7:48 PM No comments:

Posted by Norzaini at 9:02 PM No comments: 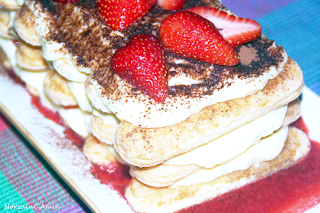 Tip : When beating the cream, chill the bowl and beater prior to use and cut short your whipping time. 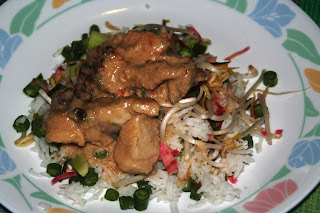 Kerabu Rice (The Rice, Salad and Chicken)
Nasi Kerabu literally means Salad Rice. Basically it is plain rice eaten with a rainbow of aromatic raw herbs and vegetable. Traditionally the rice can be dyed blue for that herbal effect, however I dont have the purple flower for this purpose, so I settled with just plain white rice. This is then served with chicken cooked in coconut milk and spices.


I love this dish for the crunchy and aromatic herbs mixed in with the rice. Although the salad mix can vary with what is available but my must have herb has to be the torch ginger. Without it this dish will fall flat, and torch ginger (bunga kantan) is one of my fave herb!
So here are the ingredients:


Blend the above into a paste


Heat oil and saute the blended spice paste and the chilli paste until the aroma fills the room.


Add the tamarind paste and sugar.

Add salt and chicken pieces and stir to mix well.


Add coconut milk and leave to simmer. Cook for another 10 minutes stirring constantly to make sure the coconut milk do not curdle.


Meanwhile pre heat your grill to high and place chicken pieces to brown for 5 minutes on each side. The chicken is already cooked,so only a short cooking time is required. You can baste the coconut gravy while the chicken is browned.


Return to gravy and serve with Rice and salad.

One of Amir's most favourite food is fried rice wrapped in egg omelette.

Nasi goreng pattaya, is a Malaysian dish popular in road side stalls. It is prepared by literally wrapping the cooked rice in an egg omelette. It is often served with chili sauce, cucumber, or fish crackers. The name comes from a region called Pattaya, Thailand. A similar dish exists in Japan, and is called Omuraisu (from the English words omelette and rice).

Heat up frying pan with a bit of oil. Add in shallots and garlic and stir fry until lightly brown and fragrant.
Add in prawns, peas and stir fry for 2 minutes. Make sure the vegetables is soft and the meat is cooked.
At this point add in the rice. Continue to stir fry until all ingredients are mixed through. Add in soy sauce, fish sauce, salt and pepper to taste to taste.
Fry for another 2 minutes and season with salt and pepper. Set aside to cool.
In clean non-stick pan brush a bit of oil. Make the omelette and flip it over once the bottom side is lightly brown.
Put in a bowl of the fried rice at the center of the omelet and wrap up the 4 edges and flip it over a serving plate. Slit the omelette open and serve with some cucumber/fish crackers or boiled sugar snaps.

Posted by Norzaini at 9:51 PM No comments:

Some days I really dont feel like having any type of protein and today was one such day. So I decided to do some grilled vege, which in my opinion is the best way to prepare them. I suppose the caramelization in the grilling process brings out the beautiful flavours of each vegetable. I needed a carb to complete the meal and I chose spiral pasta to serve this purpose. Finally, a casserole would not be complete without a good full flavored sauce, which in this case I will use a basic tomato base sauce.
The best type of vegetables for grilling is normally zucchini, aubergine, capsicum, squash, mushrooms or any fleshy vegetable.


Preparation:
Pre heat oven to 200C.
Grill zucchini & eggplant slices with a splash of olive oil. Flame grill capsicum until skin is blistered and easily peeled off. Sliced lengthways when cool. Set aside when all vegetable have been grilled.

Sprinkle the base of your dish with olive oil and layer the grilled vegetable slices. Add the pasta and topped with the sauce. Finish off with the grated cheese.

Cook in the preheated oven for 15 minutes and serve with garlic bread and salad.