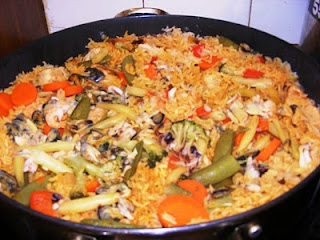 The Pakistanis/Indians have their biryanis, the Jordanians with their Maaqloobah & there's Bukhari rice which originated from Arabia. All these are basically rice dishes slow cooked with meat/chicken/fish and a variety of spice mixes closely guarded and handed down through generations.

The Spanish version of rice in spices is called Paella and if you click the title, it will link you to a very simple Seafood Paella recipe. I had prepared this tonight; using a piece of Mackerel steak cut into cubes and frozen Marinara seafood pieces as I did not have fresh mussels or prawns.

The best thing about Paella is probably the crust, where all the flavour settles and the spices are intense. Compared to the other meat and rice dishes, paella uses only two spices Saffron and Paprika and yet the flavour is rich and the aroma is so inviting.

Paella recipes actually varies from region to region in Spain. Regardless of which recipe you may use, the end result is always a winner!
Posted by Norzaini at 9:17 PM