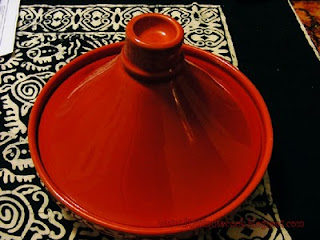 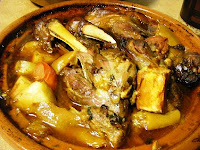 If there was a Nobel prize for a kitchen appliance, I would vote for the person who invented the Tagine! For the uninitiated, Tagine is a clay dish with a cone shaped lid traditionally used in Moroccon cuisine.

Tagine actually refers to the cooking process, the vessel and the dish all in one. The ingenuity of this process lies in the infusion of flavours slowly cooked in this "oven" without allowing any steam to escape. Trust me,the flavours of any dish cooked in a tagine is highly intensified and moisture is retained leaving the meat moist and tender.

It must have been the SBS Food Safari program that introduced me to the Tagine and I instantly fell in love with its beautiful terra cotta colour and elegant shape. I went out and bought my first tagine the very next day and I have since made it a point to cook a tagine dish at least once a week. Unfortunately, my dear Amir broke the conical lid and I now use the base for decoration in my kitchen.

Its been quite a long search and I was getting desperate for a replacement as we have been without a Tagine for nearly two months. The hubby was hinting that he misses his favourite weekly Tagine. So I ventured out today to Myers and lucky for me, they had this cute red Tagine for sale at half the original price!

The top photo is my new Tagine and the one of below is the older tagine which has served us well.

I have tried cooking both lamb & chicken recipes and both are equally delicious. I'd like to think Tagine cooking is very healthy as very little oil is used.
Here is a simple Tagine recipe that I often use. I actually got this recipe booklet along with the first Tagine that I purchased.

Just a little tip, when you are looking to purchase your tagine, may I recommend choosing the base that is deeper, so when you cook your dish, it will be able to hold more gravy and it will not spill over as most tagine dishes uses at least 1-2 cups of water.

Uncover tagine and simmer for another 10minute and serve with rice or cous cous.

Note: one of the tips I picked up from the SBS Food program was the chefs in Morocco actually soak the chicken pieces in vinegar and salt for 10-15 minutes, this makes the chicken tastes better as it would get rid of any bacteria & actually firms up the meat. Once you are done soaking the chicken ,you have to rinse with cold water just to get rid of any traces of vinegar.
Posted by Norzaini at 7:44 PM