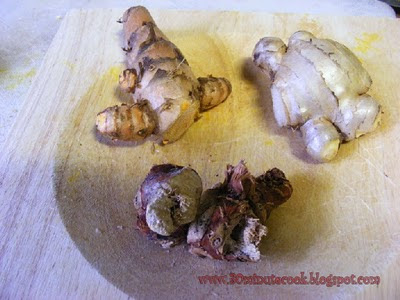 I am always trying my best to instill in our kids that we are first and foremost Malays, no matter where we are. Never to forget our roots, our heritage, our culture, values and beliefs. Part of that culture is of course the food that we eat.

For the uninitiated, Malay food is often prepared with lots of onions, garlic, ginger, turmeric and sometimes galangal. Lets get to know these three commonly used roots/tuber. I will not elaborate on the health benefits of these tubers as you can easily wiki/google them and read for yourselves.

As far as flavours, the ginger (halia) is used to spice up curries, rendangs, or even in drinks, evident in the famous teh tarik halia (ginger flavoured milk tea). I will share with you a ginger tea recipe that is both yummy and very good for your digestive system. Ginger can be kept up to 2 weeks or more in the refrigerator.

The turmeric or "kunyit" in Malay is commonly used in powder form for coloring in curries, for marinating meat or fish and one of the most important ingredients in the famous Masak Lemak Cili Padi (Turmeric in Coconut Gravy). Turmeric leaves are also used in rendangs, or used in grilling fish and a variety of dishes for its unique flavour. Similar to the turmeric root, it can be kept in the fridge up to 2 weeks or even more or longer in the freezer.

Last but not least is the galangal or the Malay word is "lengkuas", which closely resembles the ginger in appearance but not its flavour. It does not keep as long because it tends to dry and harden within a week in the fridge. Also used in dishes like laksa johor or kerutuk daging/ayam. Do not throw out your galangal when its hardened. What I do is grate then root and you get powdered galangal which serves just as well in curries and does not lose its flavour.

So here is my favourite ginger tea recipe:

Simmer in a pan with 4 cups water for 10 minutes. Serve hot with honey.

Enjoy your cuppa!
Posted by Norzaini at 4:49 PM